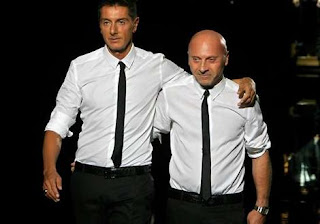 Italian fashion brand Dolce & Gabbana is planning to fold its secondary D&G brand into the main label, according to many people familiar with the matter, it is an effort to limit cannibalization between the two lines. The D&G label will disappear, but the Dolce & Gabbana line will extend its price range to carry lower-priced clothing in addition to its more expensive, tailored collection.

It has been said that the D&G line will cease in August 2012. However, there have not been any official statements from Dolce & Gabbana regarding this matter, they have apparently started notifying retailers that carry the D&G label. The Dolce & Gabbana brand is known for it’s sexy tailoring, where as the D&G line is known for it’s youthful flair. It will be interesting to see how the two designers incorporate the two brands into one. And also what the consumers response to the change will be.

The brands’ catwalk shows during Milan Fashion Week demonstrated the differences: D&G Fall 2011 RTW playfully used letters of the alphabet to make colorful patterns; Dolce & Gabbana A/W 2011/2011 sent out a sultry ensemble of suits and lace dresses. Both lines are designed and owned by Domenico Dolce and Stefano Gabbana.