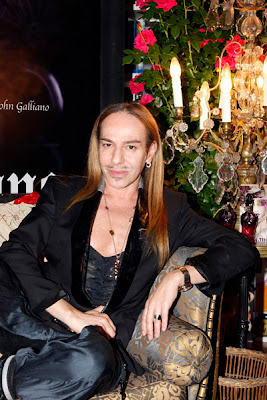 This past week saw British designer John Galliano (pictured below) being suspended from Christian Dior, after an alleged anti-Semitic verbal assault by the Dior designer in a Paris bar. A video emerged of him ranting about Jews and women. “I love Hitler. People like you would be dead today,” he tells two horrified women. “Your mothers, your forefathers, would be f***ing gassed and f***ing dead.”

Fashion people everywhere rushed to check their hair before joining the chorus of dismay, almost as if racism and sexism were not the stock-in-trade of their industry. In fact, it is an open secret in high fashion that black and minority ethnic faces – alongside women whose ribs cannot be counted through their rattan tops, or “fat mummies” in the phraseology of Chanel’s Karl Lagerfeld – are not welcome. The few working black models accuse fashion houses of declining to hire them on the basis of skin tone – model agencies recently suggested that perhaps consumers just don’t like looking at black people.

Diversity in fashion is going backwards. The recent fashion week in New York, one of the most multicultural places on the planet, featured 85 per cent white models, a proportion that has hardly changed in a decade. French Vogue famously showcased white, Dutch model Lara Stone in blackface (pictured below), and when real black models do make it on to the pages of magazines, the airbrushing invariably lightens their colouring and straightens their hair into more marketable, Caucasian styles (see picture below). Then we wonder why anxious teenagers across the world are using dangerous toxins to bleach the blackness out of their skin. 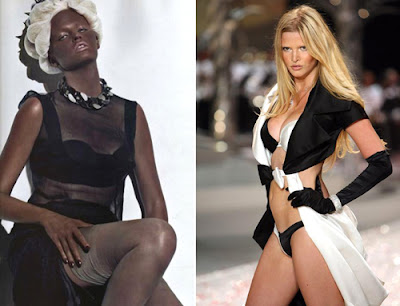 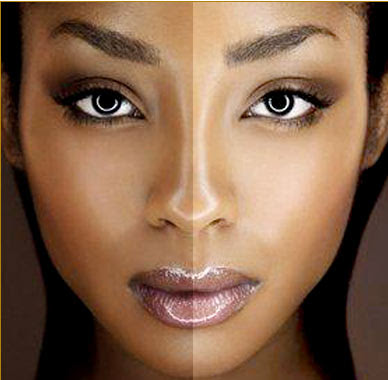 What should shock is not just the substance of Galliano’s comments, but the fact that it took a man being caught on camera explicitly saying that he loves Hitler for the fashion industry to acknowledge a teeny problem with racism. The rabid misogyny of Galliano’s outburst has hardly been commented on because, while most people now acknowledge that anti-Semitism isn’t very nice, the jury is still out on institutional sexism.

The misogyny of fashion culture, however, exceeds its apparent conviction that any woman with the temerity to do more than silently starve herself is abhorrent. Silent complicity surrounds the rapes and sexual assaults that are routine in the industry. When the designer Anand Jon was last year found guilty on 16 counts of rape and sexual battery of models as young as 14, the only surprise expressed by fashion insiders was that his victims had dared to come forward at all.

The pearl-clutching piety of the response to Galliano’s ugly outburst is a primer in tasteful hypocrisy. High-profile fashion colleagues eventually expressed discomfort with his viewpoint, if that’s an appropriate term for the sort of drooling monologue normally delivered by a park-bench pervert with two hands down his pants. The problem with racism and sexism in fashion, however, goes far beyond one slurring fantasist.